Hit enter to search or ESC to close

Need to switch off? You’ll love this relaxing Sound Bath like never before

Treat yourself to an amazing and rejuvenating experience like never before. You’ll love this full-on 2 hours indoor Sound Bath session, with Gong and Tibetan Singing Bowls at this creative studio, here in Hackney Wick, East London. You’ll leave feeling uplifted in your body, mind, and spirit.

What are the benefits of Sound Healing?

What are the benefits of Gong Bath?

Gong baths, like all types of sound therapy, allow your brain to relax into an alpha-dominant or theta-dominant brainwave state.

“In this state, your brain has time to download what’s been happening in your day. [It] allows you to process thoughts and emotions,” says sound therapist Farzana Ali. “The result is that you’ll feel calmer, happier, and less anxious after a session.”

A 2017 study found that music therapy may reduce symptoms of depression and promote overall mood. A 2013 study linked music to health benefits, including immune function and stress reduction.

Sound baths may help with:

In a 2017 study trusted Source conducted on singing bowl meditation, participants noted decreases in tension, anger, and fatigue, possibly due to suppression of the fight-or-flight response.

In a 2015 study specifically conducted on gong baths, participants reported that they found the sound vibrations healing or relaxing.

According to Ali, gongs can also be used to stimulate an altered state of consciousness or ASC. This form of deep relaxation can feel similar to a trance-like state.

“Some find being in ASC can boost creativity, feelings of wellness, or even just processing of trauma,” Ali says.

According to Hochkeppel, gong baths may also be useful in resolving emotional and physical dissonance.

“Gong baths offer a psycho-acoustic gateway to heightened states of awareness and consciousness. It’s an amazing healing tool because the frequencies surpass the intellectual part of the brain and travel to the core of the cellular system where the healing qualities are fully absorbed,” says Hochkeppel.

What are some common challenges?

City environments have a high amount of noise pollution made up of disharmonious sounds like cars, building sites and trains.

This has a negative effect on our wellbeing and can contribute to stress. Nature sounds, on the other hand, are in harmony with our energy field and have a healing and relaxing effect on the mind and body.

What are Tibetan singing bowls?

Tibetan singing bowls have been used for centuries as tools for inducing meditative states and healing. The healing happens through our brain waves becoming synchronised with the perfect resonance of the bowls. Physiologically, this initiated a relaxation response

What are Gong Bath?

Gong baths are a form of inactive meditation, where you “bathe” in the healing vibrations of sound.

Sound healing dates back to ancient cultures. Records of using gongs have surfaced from as early as ancient Egyptian, Greek, and Roman times.

“Gongs have been used as shamanic healing tools, celebratory instruments, and a method of communication for thousands of years. Evidence suggests that gong making was known as early as 4,000 B.C. and ancient alchemy sources put the gong as far back as 16,000 B.C.,” says sound healing practitioner Britta Hochkeppel.

A gong bath, or gong meditation, can help the receiver with:

What happens in our Sound Bath session?

We will start our session with pranayama to clear the mind followed by a gentle yoga asana practice to release any tension in the body. If you’re unable to do Yoga, you can sit back and relax.

At this stage we’ll be ready, to begin with, the sounds of Tibetan Singing Bowls, clearing the mind and relaxing the body.

Lastly, we’ll be combining crystal, Gong Sound Bath, Reiki, and 5th-dimensional energy healing to give you an optimum healing and relaxing experience.

How much Sound Bath cost?

The Standard entry price is £30 but under a limited promotional offer, you can get an early bird entry from £2o and a standard entry at £25.

How long is your session?

The session generally lasts approximately 2 hours but can be extended or reduced by 15 minutes depending on the group size.

When is your next Sound Bath/Gong Bath event?

You’ll be able to attend our next Quantum Sound Bath event with crystal, reiki, and 5Dcombined energy healing with an amazing sound bath session, which is planned for the  26th of September at 11:30 am. We have a limited number of spots available for this event so please book now using the link below.

Any cancellations before 72 hours of the event are fully refundable or eligible for rescheduling to future dates.

Do you offer One to One Reiki Healing?

Do you offer One to One Sound Healing?

Yes, if you want to book a one-to-one private Sound Healing session, please click on the link below to book your appointment. 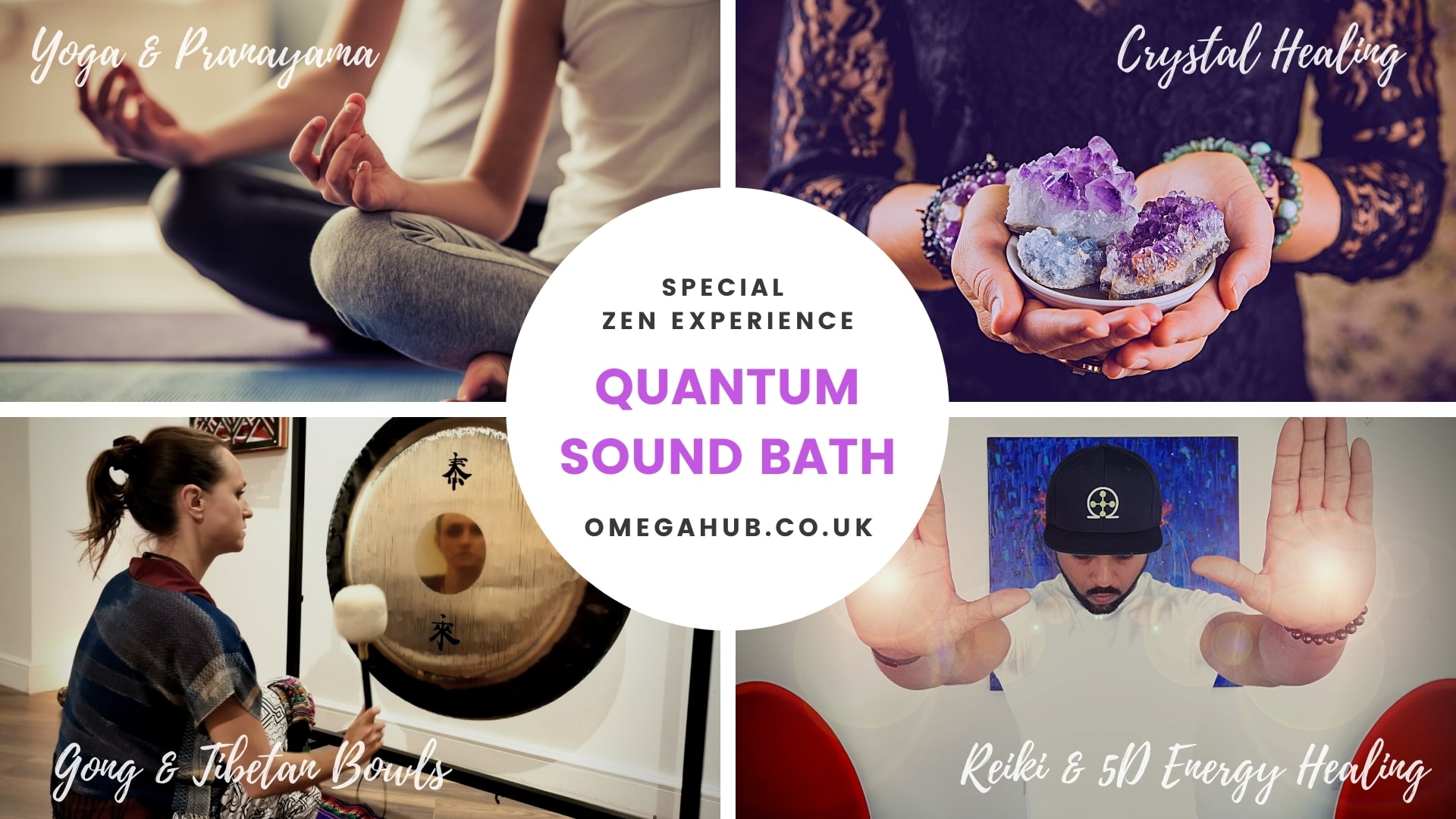 How did they feel?

“I had the most serene and transformative experience at Omega Yoga and Sound Bath. The class and facilities were top-class and the instructors were just really lovely. Highly recommend it to anyone who wants a bit of zen in their life.”

“Very calming, lovely setup. The whole experience was uplifting and I felt like I was on cloud nine. I really managed to feel involved in the Reiki and Sound Bath itself, I felt like my vibration had to be lifted. Had a very deep sleep afterward and I will be returning! 🙂”

“I did feel an extreme sense of well-being after the session and felt very at peace and relaxed. I felt heat in my feet and third eye and I saw golden colours during the healing ✨ Great value for money. The combination you both put together is amazing”

“This was amazing, a fantastic way to switch off and relax from everyday stress. I will be going back.”

“I really enjoyed this experience. Gentle asana, incredible sound healing and the reiki was really powerful. I think it was excellent value for money and would come again!”